Since Disney Plus launched on November 12, people have been swept up in all the family-friendly chaos, indulging in a long list of classic Disney favorites. While the streaming service also plans to offer new original content, the company is definitely taking advantage of our generation’s lust for nostalgia, providing exclusive access to the Star Wars, Marvel, Pixar, and National Geographic franchises (and reminding us how much Disney dominated our youth with films like The Lion King, The Cheetah Girls, and Gotta Kick It Up). Honestly, the list of iconic feel-good films is outrageously long, and it’s easy to understand why everyone’s so excited.

But it’s no secret that Disney’s wholesome image has been blemished by a long, varied history of controversy and criticism. While Disney has been accused of sexism and plagiarism numerous times, one of the most notable topics of discussion in recent years has been the company’s tendency to racially stereotype its characters, a propensity that is  especially notable in early Disney films (though many scholars and film critics argue that this has carried into the 21st century, despite Disney’s attempts to be more culturally sensitive).

On many occasions, Disney has acknowledged the racist nature of its older animated films, like Dumbo, The Jungle Book, and The Aristocats. In the descriptions for several programs on Disney Plus, there is a brief warning about the “outdated cultural stereotypes” contained within each film, and while several people view this disclaimer as a sign of progress, Disney has been criticized for making a bare minimum effort toward addressing the problematic elements of its past.

And speaking of the company’s past, how could we forget the time that Disney tried to trademark the term “Día de los Muertos” / “Day of the Dead”?

Back in 2013, Disney approached the US Patent and Trademark Office with a request to secure “Día de los Muertos” / “Day of the Dead” across many different platforms. At the time, an upcoming Pixar movie with a Día de los Muertos theme (read: the early stirrings of Coco) was in the works, and Disney wanted to print the phrase on a wide range of products, from fruit snacks to toys to cosmetics. Por supuesto, Disney received major backlash for trying to trademark the name of a holiday—what is more culturally appropriative than claiming ownership over an entire celebration? Especially one with indigenous roots?

“The trademark intended to protect any potential title of the movie or related activity,” a spokeswoman for Disney told CNNMexico at the time. “Since then, it has been determined that the title of the film will change, and therefore we are withdrawing our application for trademark registration.”

But prior to withdrawing their application, Disney received extensive backlash from the Latnix community. Latinos all over social media expressed their disdain for Disney’s bold and offensive attempt to take ownership of the holiday’s name, even starting a petition on Change.org to halt the whole process. Within just a few days, the petition had garnered 21,000 signatures.

Although Disney didn’t acknowledge whether the online uproar had influenced them to retract their trademark request, they were clearly paying attention. Lalo Alcaraz, a Mexican-American editorial cartoonist, had expressed open disdain at what he called Disney’s “blunder,” creating “Muerto Mouse”—a cartoon criticizing said blunder—in response. 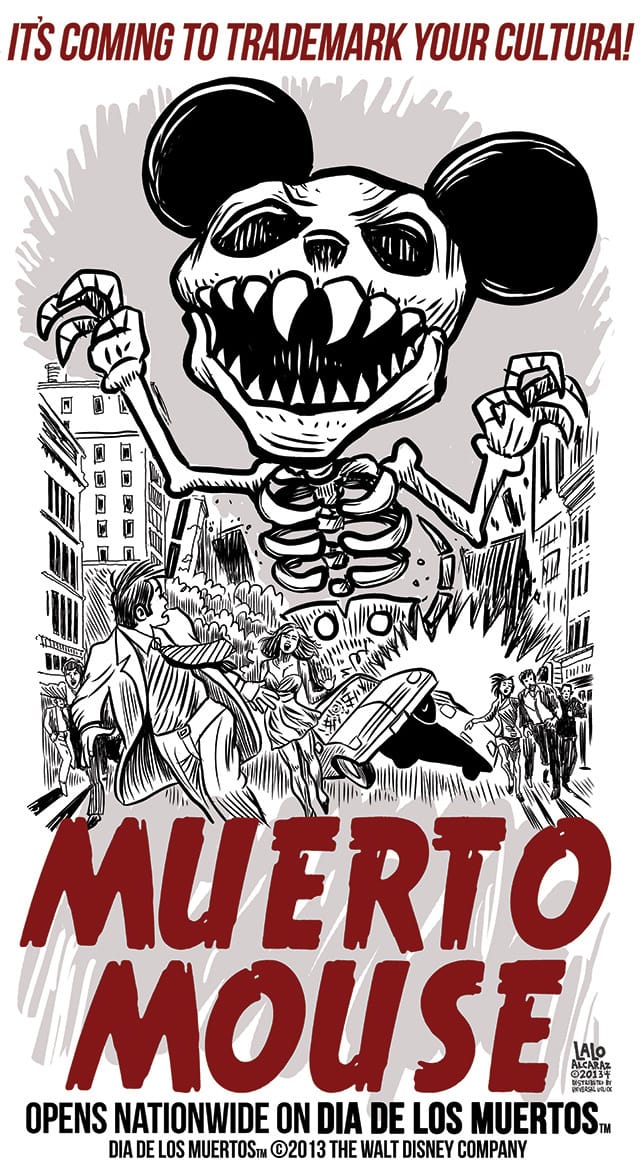 This wasn’t the first time Alcaraz had criticized Disney with his cartoons. After the trademark fiasco, Disney definitely caught wind of Alcaraz’s position, and in an effort to approach the upcoming Día de los Muertos movie with sensitivity, the company hired him to work as a cultural consultant on the film.

Although several folks celebrated this development, Alcaraz was widely denounced for collaborating with Disney—many people called him a “vendido,” accusing him of hypocritically selling out to the gringo-run monolith against which he had previously spoken out. But Alcaraz stood his ground, confident that his perspective would lend valuable influence to the movie and ultimately prevent Pixar from doing the Latinx community a disservice.

“Instead of suing me, I got Pixar to give me money to help them and do this project right,” Alcaraz said. “I was let down because I was hoping people would give me a little bit of credit for the stuff I’ve done; to give me the benefit of the doubt.”

And, sin duda, Coco emerged as one of the most culturally accurate films that Disney has ever produced. Employing an almost exclusively Latino cast and crew, Coco seamlessly captured the beauty, magic, and wonder of Día de los Muertos, depicting the holiday with reverence and respect. And after becoming the top-grossing film of all time in Mexico, it’s safe to say that Coco helped Disney bounce back from its trademark mishap, even if more controversy is bound to emerge in the future.