You might have noticed an uptick in friends searching their names on Urban Dictionary as of late, a website you might remember from back in the day cracking up at search results during high school lunch.

Even if you weren’t familiar with Urban Dictionary before the latest craze, trust us: searching friends’ and coworkers’ names es la receta perfecta for lots of laughs. Case in point? As one Twitter user uncovered, Samanthas are “sweet as sugar or viscous venom,” which is low-key kind of scary but we’re also into it? And as per another user, Olivias are defined by being “a chicken McNugget,” which we’re totally okay with and accept 100%. Yes, Urban Dictionary is a lottery, but it can also be strangely accurate.

Sure, some users might be questioning the trend, but nosotros? We’re obsessed. We do have to give credit where it’s due. The user that goes by @bymayuuu on Instagram, created this sticker that currently has 2.7 million IG shares.

Search your loved ones’ names asap, like we did at mitú (and yielded some hilarious results below) – BRB, nos estamos muriendo de la risa. 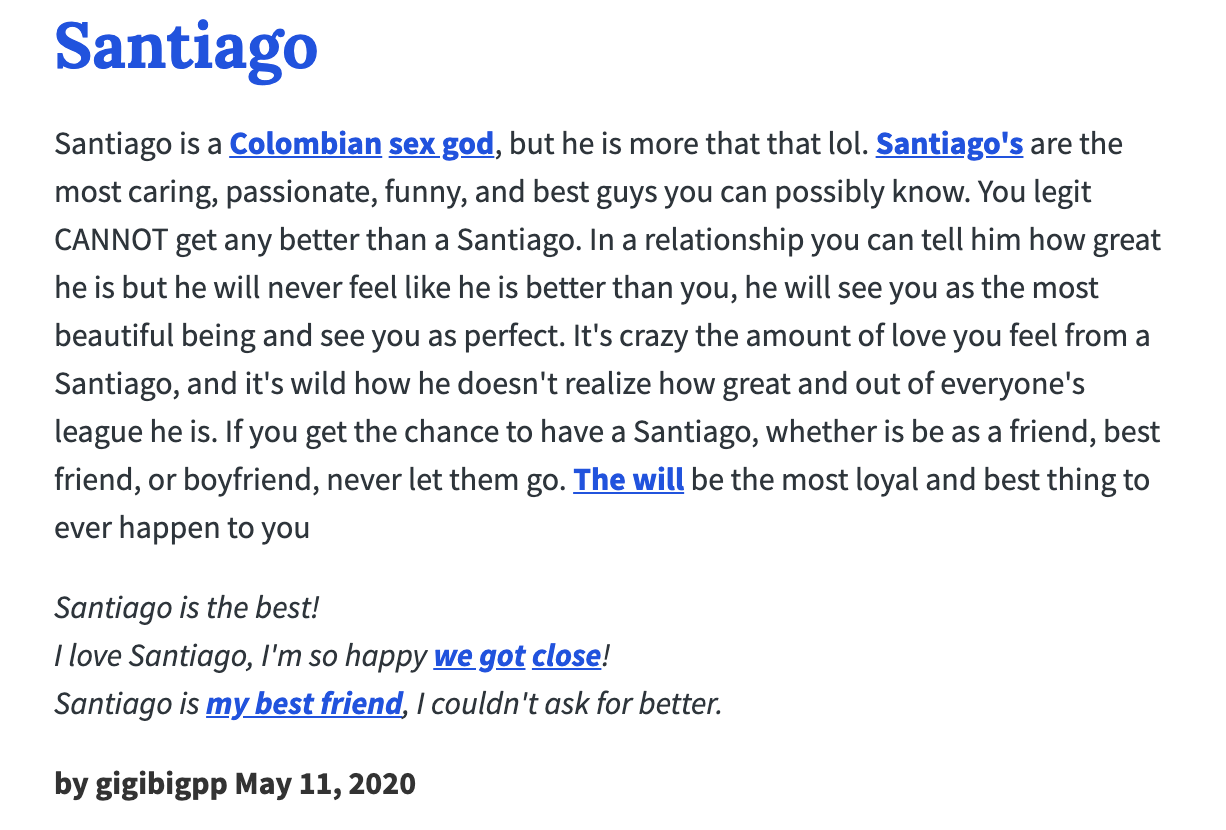 While we can’t vouch for every Santiago being a “Colombian sex god” (although we’re sure they’re out there), if you know a Santi, you might recognize all those descriptors about them being “caring, passionate” and seriously cómicos. They’re loving and “out of everyone’s league,” so if you’re dating a Santiago, tienes mucha suerte *wink.*

Ah, it appears Wendys are notorious for being super kind and always there for their loved ones, but as per Urban Dictionary, they’re not to be crossed. While “everyone likes” a Wendy, they “will not hesitate to take you down a notch,” which is all the information we need to not mess with them. Also, author Bud Collins might actually have a problem with a real life tennis teammate called Wendy? BRB, grabbing some popcorn and trying to get all the chisme on that.

As Lady Gaga once made clear, Alejandros are charismatic, kind, and seriously bellos. With a “perfect smile,” cualquier Alejandro will sweep you off your feet, but he’s no doormat, either. With a protective instinct that knows when to lay off and let you be free and independent (especially on the pista de baile), everyone needs an Alejandro in their life. And they apparently guard you in mosh pits, which is always a plus in our book. 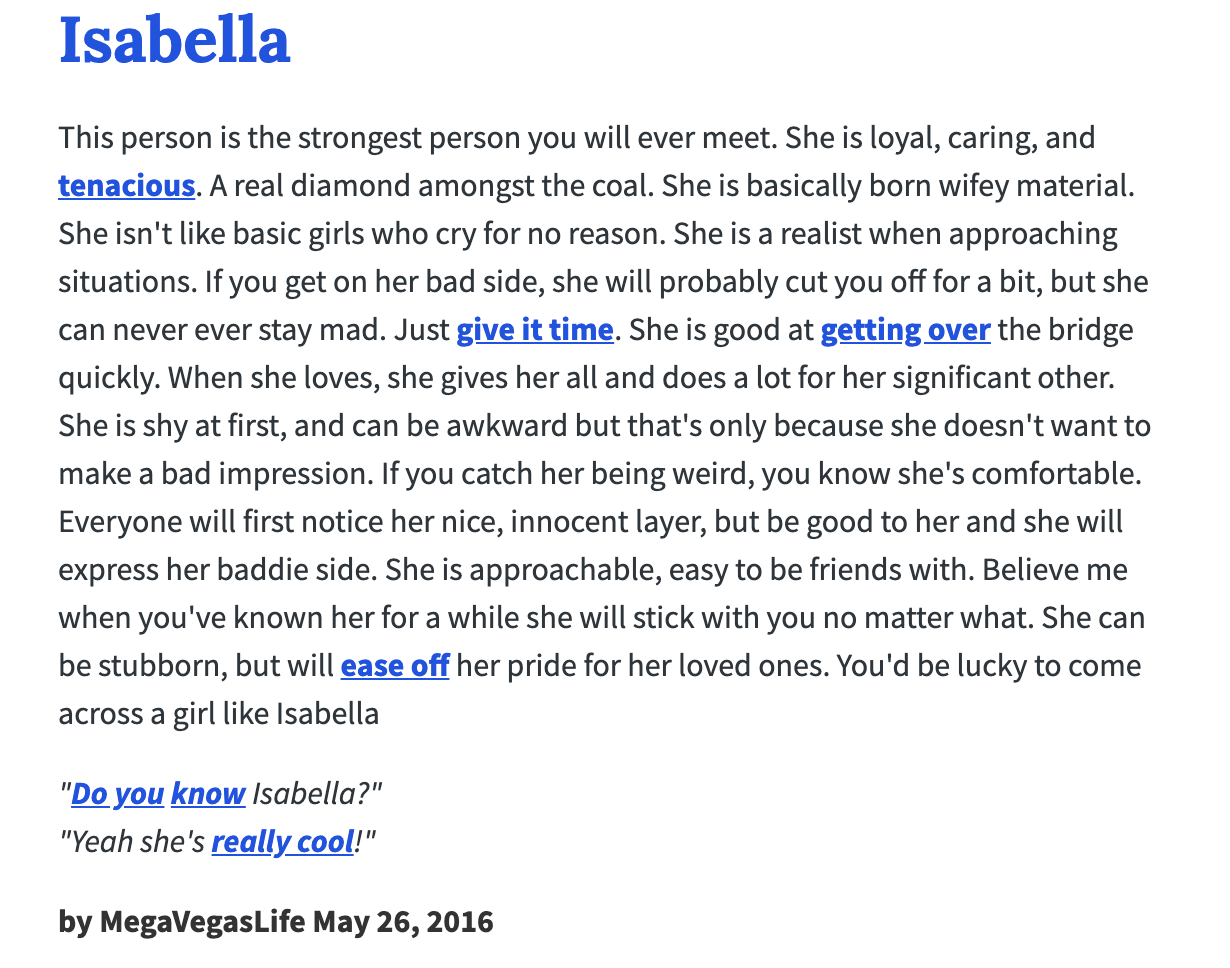 If you know an Isabella, you know they’re truly loyal, son las más buena gentes, light up any dinner table with their jokes, and are ambitious, too. But according to Urban Dictionary they also have a “baddie side” (okay!) and are “wifey material.” Isabellas are a bit rencorosas when you get on their telenovela-style dramatic side, but they easily soften up with some pastelitos and an earnest perdón.

Ay, Julios. Yes, they’re known as the eternal heartbreakers for a reason, and that’s why we’ll never be truly over our middle school crush on Julio from science class (if you’re reading this, call me!). If you’re a Julio, siéntete bien because “you’re the coolest person to ever exist,” and you’re “hot, sexy” and fiercely intelligent. Whew! And as per Urban Dictionary’s research, you’re “good in bed” too. Excuse us while we fan ourselves for a while. 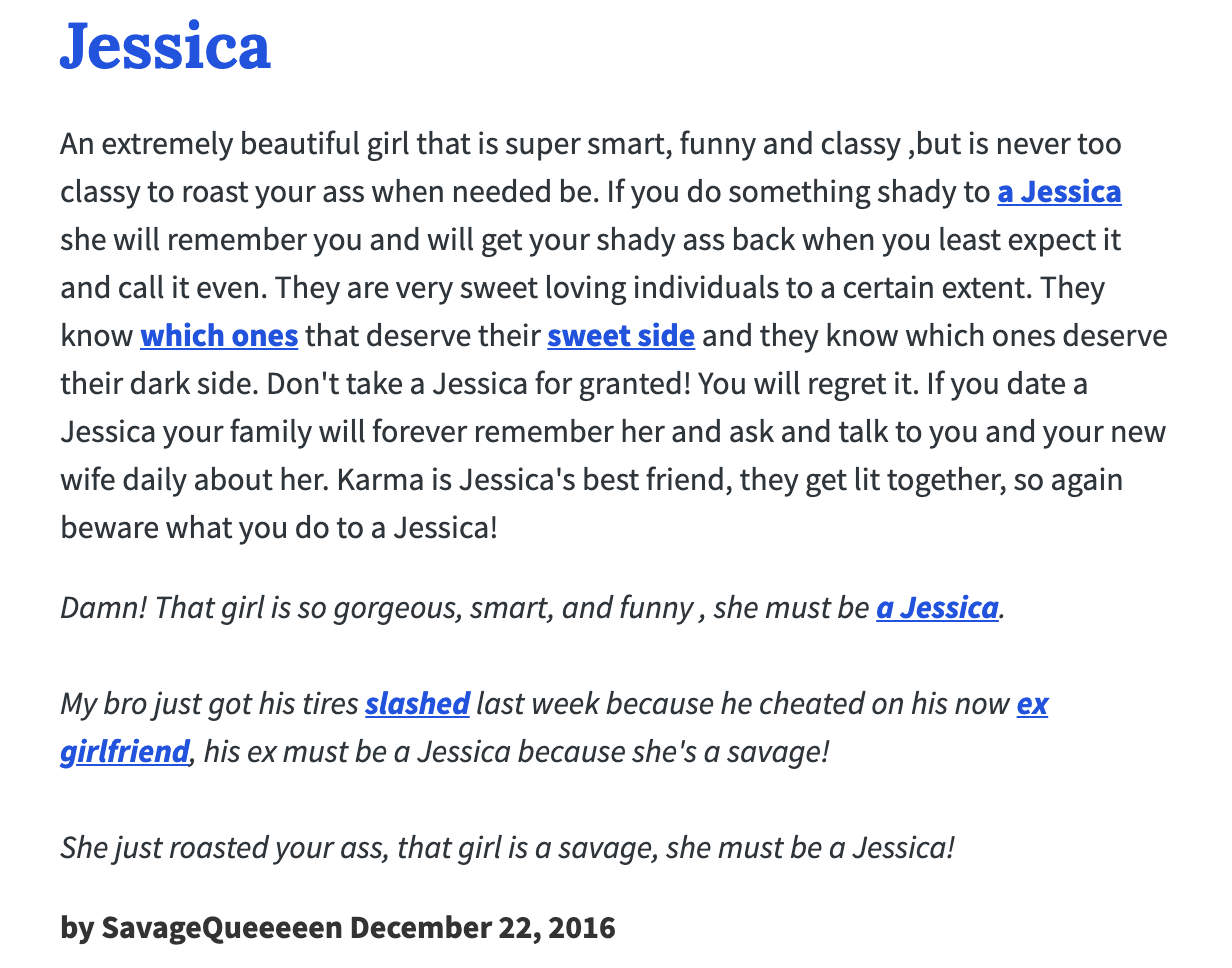 Ahora las Jessicas, truly “beautiful” people that are always “classy,” even when leaving a bar at 5:00 a.m. with heels in hand (la elegancia viene de adentro, at least that’s what our abuelas always say). They have a sweet side that rivals dulce de leche, but, careful how you treat them. If you’re acting “shady,” they won’t take it lightly — and they call their friend karma to set things straight. They’re also apparently “savage” and slash tires if feeling betrayed. Ya te lo advertimos!

If you have a Monica in your life, estamos seguros que you can’t live without them even if you tried. Monicas are organized, always on their A-game, they’ll pick you up at 3:00 a.m. when stranded at a club aunque te quieran matar, and they’re kind to everyone. Lighting up a room, they’re “amazing, intelligent” and gorgeous. Only one hitch: if you marry one, they might become “your future dictator,” so maybe just keep that in mind?

With one of the most beautiful names ever, Lucianas are just as hermosas — plus, they’re crazy smart. If you watch “Jeopardy” with one, you’ll be amazed at how they answer questions before the contestants, and they’ll quickly do the math on tipping at restaurants before you have time to open your phone calculator. Lucianas are simply the best, plus they’re kinder than your tía that always gives you galleticas María when you go to their house (and that’s saying something). As per Urban Dictionary, Lucianas love dogs, but hate cucarachas, mosquitos, and arañas with a passion. Are we blaming them? Nope. 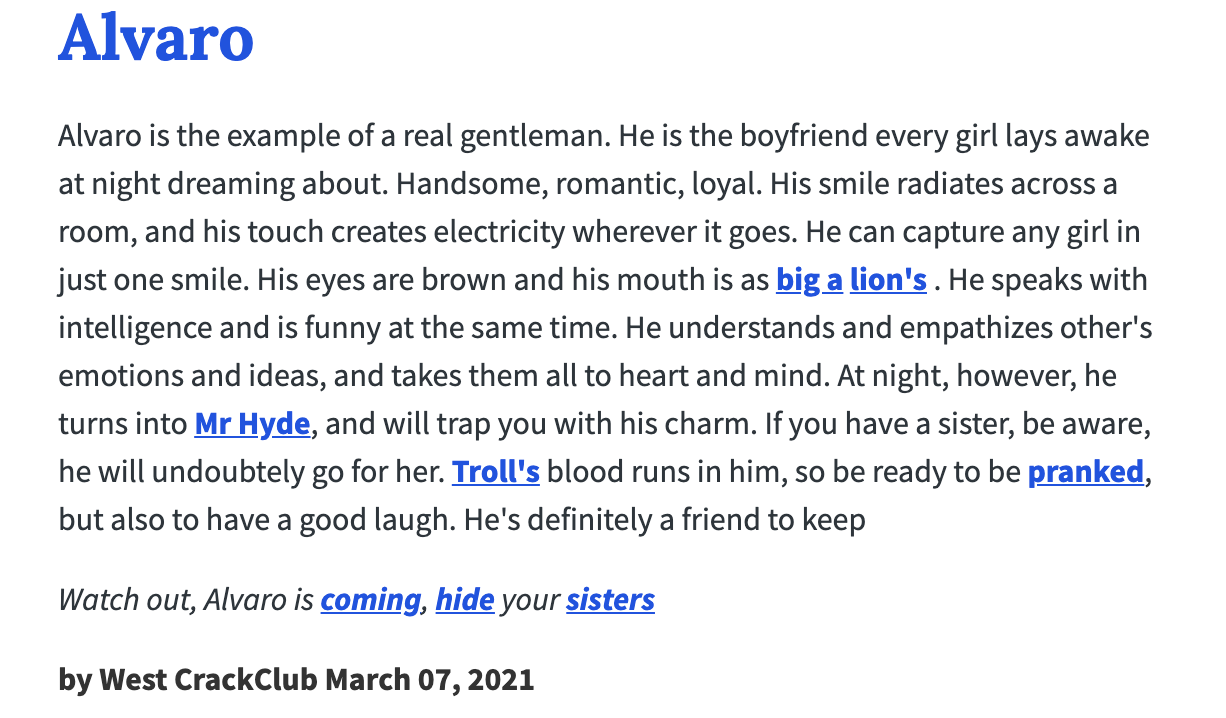 Last but not least, Alvaros: otherwise known as “handsome” and “romantic” guys who will treat you like only a principe would. If you’re dating an Alvaro, you know they’re “a real gentleman” who would never cheat (your mom would serve them a chancletazo anyway), and they have tons of charm. They have a certain “electricity” that draws you to their flame, and they’re empathetic, too. We’re just a bit concerned about that “Mr. Hyde” side that comes out at night? And there’s a whole “hide your sister, hide your wife” vibe going on by the end, but we’ll just pretend we didn’t see that. Aside from that, ten out of ten!