But, somehow, she got wrangled into a balloon dance-off set to “Despacito.”

The real winner in this balloon competition? Mexican host Alan Tacher, who was clearly excited to give Berry a big squeeze. 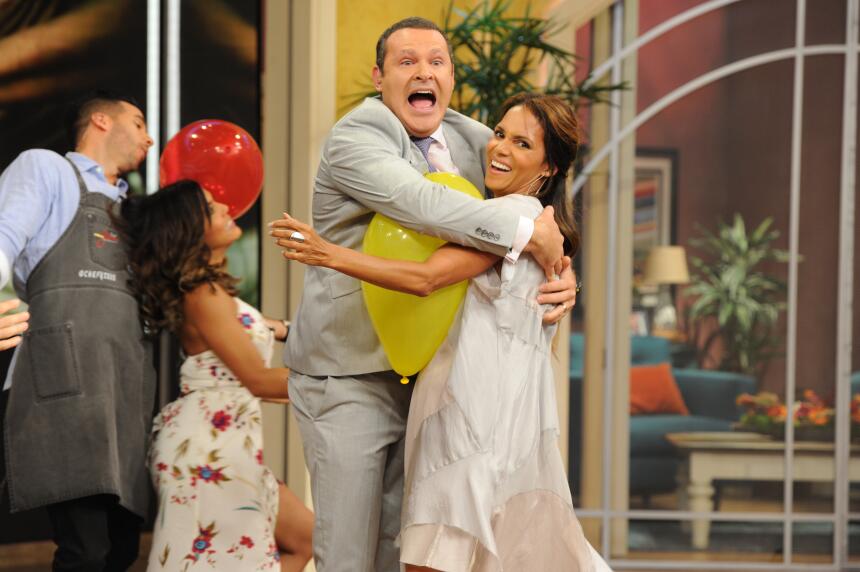 It’s not every day you get to dance with (and hug) an A-list star.

During the interview, Berry also shouted out one of her favorite writers, poet Just Mike, who promptly posted the video on his Instagram.

That’s right, Halle, don’t be letting these boys play games with you. No more Eric Benets up in here.

No stranger to the show, Berry was there a few years back making tacos with the whole team. 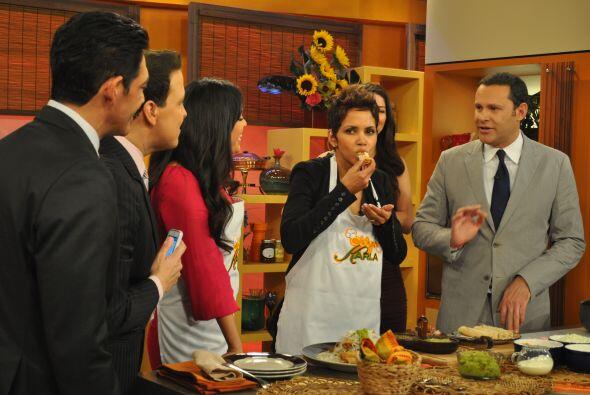 It seems like food is always part of the interview whenever Berry is around.

Here’s the trailer for Berry’s upcoming film “Kidnap,” which wasn’t really discussed in depth, due to all that balloon dancing.

“Kidnap” is out in theaters August 4th.


READ: The Score You Get On This Quiz Will Determine How Many Times You’ve Heard ‘Despacito’ On The Radio

According to Remezcla, the band is currently on tour in the Americas. During a show stop in Miami, where the group performed at the Watsco Center at the University of Miami, the fellas pulled up to Univision. They appeared on ¡Despierta América! on Sunday, and they gave all of their fans the best possible treat when they moved their hips to the Wilfredo Vargas classic “Abusadora.”

Brace yourselves, because the visual of the boys dancing to our fave Dominican rhythms is more exciting than the news.

Still there? Watching on repeat? Speechless?

Latinx fans had tons to say once they regained consciousness after watching NCT 127 sort of kill it with their merengue moves.

There were so many slayings.

So many people were reborn from this video.

LOL basically we’re back in the 90s and seeing the Backstreet Boys.

Literally if you ever doubted the power of a yell… check out the appearance.

Like can I get an invite to this party??

People can’t stop crying over seeing them dance either.

K-pop stars seriously have a thing for Dominican music. Last year, Leslie Grace taught the boys of Super Junior some Bachata steps in the middle of Times Square. The New York dominicana and band also released their energetic hit “Lo Siento” together in 2018.

Recommend this story by clicking the share button below!

Better Get To Sleep, Luis Fonsi Says The Idea For ‘Despacito’ Came To Him In A Dream

Better Get To Sleep, Luis Fonsi Says The Idea For ‘Despacito’ Came To Him In A Dream

“It sounds a little cliche and a little cheesy, but it’s the truth.”

Get out your notepads and thinking caps, because Luis Fonsi is here to take you to school. He was recently on “The Tonight Show with Jimmy Fallon” to perform, but also took the time to give away his biggest secrets to writing a hit song. It just so happens there was a secret formula to creating “Despacito,” a song that has dominated the airwaves, staying at number one all over the world and in the U.S. for 16 weeks (tying the all time record), and garnered over 3 billion views on YouTube. So here’s what you’ll need:

And voila, folks, there you have it. All the ingredients and steps necessary to have one of the biggest songs of all time. Tune in next time where we show you how to get snubbed at the VMAs.

And now for dessert, watch Luis Fonsi perform “Despacito” on “The Tonight Show.”

READ: Mariah Carey Fans Are Cheering For Taylor Swift For Knocking ‘Despacito’ Out Of #1 And It’s Hilarious

Recommend this story to a friend by clicking on the share button below.

TwitterFacebook
Tags:
DespacitoHow I Wrote That SongLuis FonsiThe Tonight Show With Jimmy Fallon
Most Read
‘The Tax Collector’ Director Denies That Shia LeBeouf Is In Brownface BY Jorge Rodriguez-Jimenez
#GoyaAlternatives Is Giving People A List Of Companies And Recipes To Help Boycott Goya BY Jorge Rodriguez-Jimenez
Daisy Coleman, The High School Sexual Assault Survivor Featured In A Netflix Documentary, Has Died By Suicide BY Cristal Mesa
BREAKING: After Almost Thirty Years, A Tía Abuela Took The Plastic Off Of Her Chair And Twitter Is Sweating BY Cristal Mesa
See The Stunning Portraits This Photographer Took Of People From The Most Endangered Indigenous Tribes In The World BY Andrea Reindl
FOLLOW US
Copyright© 2019 mitú Inc., all rights reserved
WE RECOMMEND
Entertainment
These Reality TV Shows Were So Successful In The US That They’re Being Remade For The Latin American Audience
Jackie Mejia / October 12, 2018 Jackie Mejia
Entertainment
J.Lo Sang About A Ring, ‘Despacito” Swept The Awards And Other Highlights From The Billboard Latin Music Awards
Jackie Mejia / April 27, 2018 Jackie Mejia
Entertainment
WATCH: This Duet Performance Gets Venezuelan Singer, Michelle Sussett, To The Next Round Of ‘American Idol’
Jessica V. Garcia / April 10, 2018 Jessica V. Garcia