For the better part of the last 10 years, Puerto Rico has gone through one of the worst economic crises the island has ever seen. As a territory of the United States, Puerto Rico does not have the same financial protections as American states and cities, which means it is sinking into a debt hole for which there is no bottom. The island’s debt currently sits at about $72 billion.

Normally, a U.S. state, city or other municipality in the same financial situation could declare bankruptcy and begin the process of halting the debt and figure out how to get out of it. In 2013, the city of Detroit filed chapter 9 bankruptcy and was allowed to shed $7 billion of their debt and begin the process of bringing back services and spend 1.7 billion in order to do so. Another way to address the debt would be with a bailout, the way the U.S. did for the banking industry and then the auto industry back in the late 2000’s.

According to an article out by NPR, Monday was the last day for a deal to be made before creditors began filing lawsuits. No deal was made, and as of Tuesday May 2nd, the lawsuits began to pour in. On Wednesday, Governor Ricardo Rosselló, petitioned for relief under Title III of a new federal law, but it’s a law that has never been used and requires approval from a judge, which has yet to happen. Either way, it’s a sticky situation.

And it doesn’t seem like President Donald Trump’s administration plans to do anything about Puerto Rico.

During his presidential campaign in 2016, Donald Trump made it sound like he and his business friends saw Puerto Rico’s debt crisis as a great opportunity to be cashed in on.

“I’m the king of debt, I love debt.” It sounds like he had no plans then to help Puerto Rico directly, and it seems like he still has no plan now.

Recently Trump tweeted about what he thinks is going on in Puerto Rico.

Democrats are trying to bail out insurance companies from disastrous #ObamaCare, and Puerto Rico with your tax dollars. Sad!

Apparently to scare tax-payers into thinking they were on the hook.

3.5 million US Citizens who live in PR deserve equal treatment. We do not ask for a bailout, but need help to provide access to health care

This has been a typical Trump tactic, using the fear that foreigners, outsiders or “others” are taking tax dollars from the American public. He’s counting on people who still don’t know that Puerto Rico is part of the U.S. or that Puerto Ricans are born citizens, to rally sentiments against doing what is right, which would be to help the Island of Puerto Rico.

A proposed referendum that could have helped Puerto Rico was nixed when Attorney General Jeff Sessions denied the island the $2.5 million needed for it. 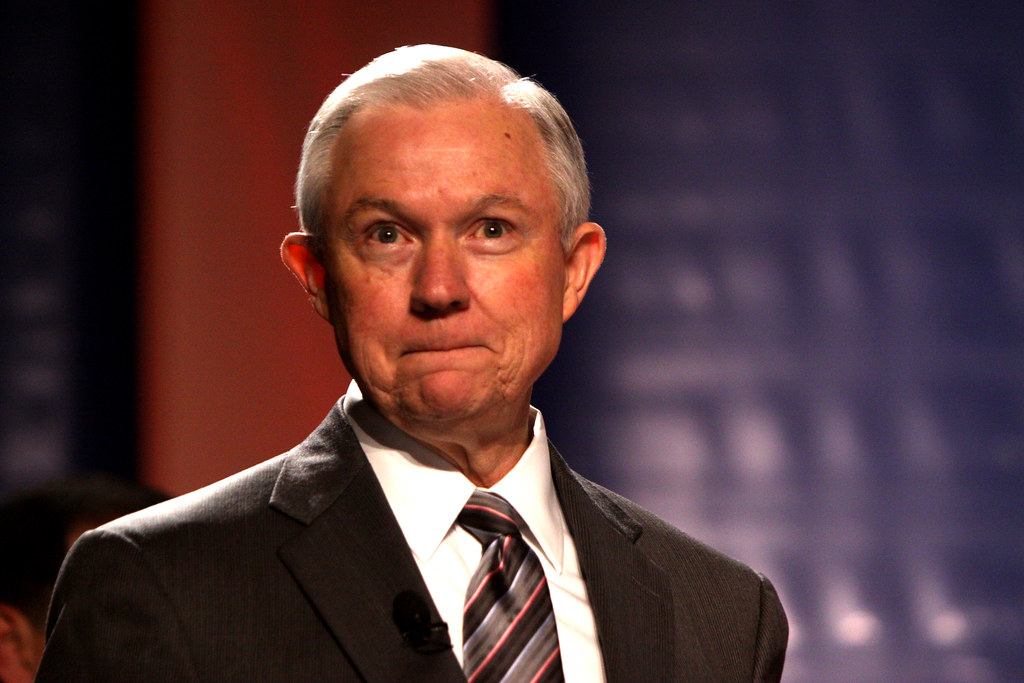 Teen Vogue reported last week that Sessions and the Department of Justice decided to withhold the $2.5 million that Puerto Rico would need to hold a referendum. The vote would have decided Puerto Rico’s relationship status with the U.S. “It’s complicated” doesn’t appear to be cutting it anymore.

The referendum could have been a major turning point, as the U.S. currently has the Fiscal Control Board (or “la junta” as it’s known) in place overseeing all major financial decisions on the island.

Many fear that this board favors creditors over the people and they have ultimate control over decisions that affect human rights, like health care. The group is formed under what is called PROMESA the “Puerto Rico Oversight, Management, and Economic Stability Act” and has ultimate financial power, capable of undermining choices made by elected officials, which has led some, including Rep. Luis Gutiérrez of Illinois, to call it a “wholly undemocratic activity.”

Its executive director, Natalie Jaresko, worked to help improve Ukraine’s financial crisis. The difference is she’s Ukrainian, she speaks the language and even holds dual citizenship with Ukraine. Many have argued that a Puerto Rican elected official should be charged with helping right Puerto Rico’s financial future. Ethical questions have also been raised of Jerasko, including questions about how she handled a $150 million tax-payer financed investment fund. The Nation reported on another questionable member of “la junta” saying: “There is popular awareness that board member Carlos García was a past head of Puerto Rico’s Government Development Bank and an executive of Banco Santander, which underwrote deals worth up to $61.2 billion of the island’s debt.”

With the referendum to decide Puerto Rico’s independence de-funded, a financial board many feel doesn’t represent the people and a president who is inciting fears, students have taken to the streets.

Students Are Now Leading the Resistance to Austerity in Puerto Rico https://t.co/LRePEDBVm9

According to The Nation, since taking over in January, the Fiscal Control Board has cut $512 million in funding from the University of Puerto Rico through 2025, which students feel puts the university in serious jeopardy. According to the article, a first year law student named María de Lourdes Vaello, said it best while protesting last week: “The purpose of the university is to provide a high-quality education to the middle and lower classes, but now we’re facing cuts that threaten the very existence of the institution.”

A change is still possible though. 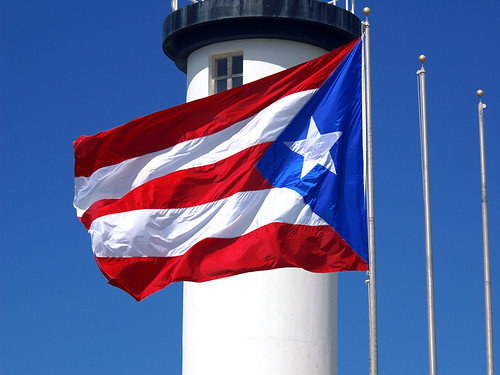 According to Teen Vogue, although Sessions and the DOJ are withholding funds, a vote will still be going through with “independence,” “statehood,” and “territory” as possible options on the ballot. With the financial and political crises on the island at an all time high, people are hopeful that a definitive status between Puerto Rico and the U.S. will begin to change things for the better. It’s understandable that for the 3.47 million still living on the island, with a 11% unemployment rate, who have had to live under these conditions for over a decade, the light at the end of the tunnel must seem dim AF.


[H/T] What You Need to Know About Puerto Rico’s History as a U.S. Territory

READ: Trump Said The Presidency Is Harder Than He Expected So People Joined Vicente Fox In Inviting Him To Quit

Social media has been filled with images of protests from across the country. Peaceful protesters have been beaten, shot with rubber bullets, choked with tear gas, and arrested by police officers. With hundreds of people arrested for protesting the murder of unarmed Black people by police officers, here’s how you can help.

How To Help Minneapolis

Minneapolis is the epicenter of the recent civil unrest in the U.S. following the death of George Floyd by police. Floyd was accused of trying to use a counterfeit $20 bill. Minneapolis police officers responded and fired police officer Derek Chauvin was caught on video kneeling on Floyd’s neck until he died. There were three officers on Floyd and he was cuffed as Chauvin kneeled on Floyd’s neck.

Official George Floyd Memorial Fund – Floyd’s family has started the Official George Floyd Memorial Fund to establish financial help for his family. The fund has raised more than $7 million. According to the text on the GoFundMe page, a portion of the money collected will go to caring for Floyd’s children and setting up educational funds for them. The family has a second fund started by his sister.

Minnesota Freedom Fund – The Minnesota Freedom Fund is using donations to pay bail for people arrested for protesting in Minneapolis. The fund was established to fight back against the cash bail system in the U.S. that disenfranchises people who can’t afford to pay to avoid being incarcerated before their trial.

How To Help New York

How To Help Atlanta

The Action Network – Atlanta has seen sustained peaceful protests since George Floyd was killed. The Action Network is raising the funds now to help those in Atlanta pay for their bail if they are arrested while protesting in the state’s capital.

How To Help Chicago

Black Lives Matter, Chicago Chapter – The Black Lives Matter chapter of Chicago is asking for donations to maintain the organizing happening in the streets. The chapter has joined other chapters around the country in orchestrating major protests demanding police reform. Donations to the organization help to sustain them during this time.

How To Help Los Angeles

Peoples City Council Freedom Fund – Due to COVID-19, Los Angeles has set all bails to $0 to limit the spread of the virus in confined places, like jails. However, community leaders are monitoring to make sure that policy is still used for protesters. The Peoples City Council Freedom Fund is helping protesters by providing them legal support, medical bills, transportation, supplies, and protective gear to protesters.

How To Help Nationally

Unicorn Riot – Unicorn Riot is an independent, nonprofit media organization offering on the ground reporting. According to the website, Unicorn Riot is free of corporate and government funding so they can cover stories as they see fit.

READ: Cardi B Has An Important Message About The Deaths Of George Floyd And Breonna Taylor

A sneaker shop in Germany is selling some of the most iconic Nike sneakers created, the Air Force 1 “Puerto Rico.” The sneakers will be sold at a shop in Germany and fans cannot wait to get their hands on these sneakers.

German sneaker fans have a chance to get their hands on a pair of Nike Air Force 1 “Puerto Rico.”

On June 2, the shoes will be available at the shop, and fans can’t wait. The shoe is one way for every Puerto Rican to show their pride in where they come from. The shoes were originally released in 2005 and this release is something exciting.

However, U.S. sneakerheads will be left out.

The store, which is located in central Germany in the city of Fulda won’t be able to shop these to other countries. That being said, only Germans will likely get their hands on these shoes because of the Covid-19 pandemic. Travel is restricted so it seems likely that you will be able to hop on a plane to get these shoes.

These shoes are not the only way for Puerto Rican fans of Nike shoes to show their cultural pride. The shoe company has other options for the Caribbean people to wear their pride on some sneakers.

The man difference in these shoes from the original is the work on the upper shoe. The upper shoe is a tonal midfoot Swoosh and a navy sockliner. The Puerto Rican flag is embroidered on the tongue and heel fo the shoe to really drive home the Caribbean pride.

READ: After Revealing He Played In Sneakers With Holes As A Kid, Neymar Racks Up An $18,000 Bill On ‘Sneaker Shopping’

TwitterFacebook
Tags:
clothingfashionNikePuerto RicoShoesSneakers
Most Read
Here Are The Businesses Supporting A Trump 2020 Reelection BY danielli
Violence In Mexico Is Expected To Get Even Worse Just As The Country Enters The Worst Phase Of The Pandemic BY Justin Lessner
8 Racist Habits Latinos Seriously Need To Drop BY Trilce Ortiz
Here’s What Telemundo And Univision Are Up To While The Rest Of Us Are Out Fighting For Black Lives BY Cristal Mesa
A Woman Left Racist Notes On People’s Front Doors Telling Them America Is A ‘Nation Of White People’ BY Justin Lessner
FOLLOW US
Copyright© 2019 mitú Inc., all rights reserved
WE RECOMMEND
Things That Matter
Puerto Rico Is Planning To Vote On U.S. Statehood Once Again And Here’s Why So Many Are Against The Idea
Justin Lessner / May 21, 2020 Justin Lessner
Culture
Here Are Nine Fascinating Facts You Probably Didn’t Know About Puerto Rico
Justin Lessner / May 21, 2020 Justin Lessner
Entertainment
Adam Ray Okay Is Launching A New Clothing Line
Cristal Mesa / May 20, 2020 Cristal Mesa