The 1 Big Mistake this Politician Made

The 1 Big Mistake this Politician Made

Remember the good ol’ days when politicians didn’t use social media and they’d reserve their racists comments for press conferences or government meetings? Those days are long gone.

Well, John Bradford, Republican legislator from Kansas, didn’t actually say anything, he shared this meme, which shows a man in a sombrero, a deformed President and celebrates the ending of Obama’s presidency. Of course, incredibly offensive to both Mexicans and President Obama. 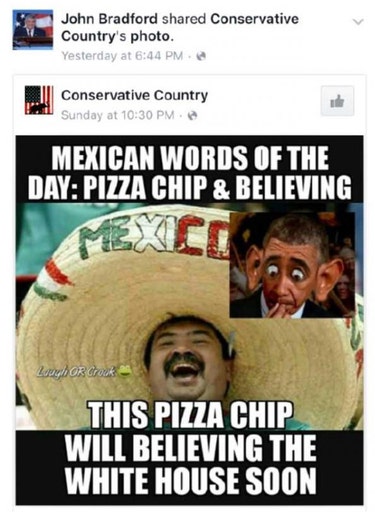 READ: Obama Knows You Shouldn’t Piss Off Mexicans in a Parody Video Set to Drake’s ‘Back to Back’

What’s worse is that he didn’t think anything of it and only deleted it two days later, after receiving criticism from his Democrat colleagues: “Kansans should not have to tolerate this type of bigoted mentality from anyone, especially an elected official,” said Melody McCray-Miller, Kansas Democratic Party’s vice chairwoman.

To that, Bradford said: “I did not create the image, but I did share it, which was in bad taste. I regret that decision.”

Listen, we all make mistakes with social media, but the old adage still applies, “if you don’t have anything nice to say, don’t share.”

Read more about this story from Fox News here.

Don’t forget to share this story with your friends by clicking the button below!

President Obama has become a strong and lasting pop culture figure. He is often referenced in tv shows. movies, late-night talk shows, and a myriad of other moments. He has even become a tastemaker in some pop culture rounds. Namely, Obama releases an annual list of favorite things in entertainment and pop culture. It is a list that people have come to expect and look forward to as Obama has often highlighted the most influential people of the year. This year’s list is no different and there were some notable Latino additions to the list that people definitely paid attention to.

Former President Barack Obama released his culture list of 2019, and he included some of our favorite Latino creatives.

Obama’s recommendation lists have been a part of our lives since he began his presidency. Every year, he releases a list of his favorite books, music, and movies, and we’re always so excited because he typically is into things that we’re into as well. Not just that, but he also turns us onto new creatives because if he’s into it, we know for a fact it’s good.

Oh, the music front, Obama did not disappoint. His favorite music of 2019 surprised many because while we know he has impeccable taste, we didn’t realize he could get down like that.

We need a second to absorb this awesomeness. Not only does Obama give a list of entertainment to make your year better, he included one of the Latin music’s biggest bops of the year.

People could not get over the fact that Obama gets down to Ozuna just like we do.

We truly want to know who put Obama onto Ozuna. Was it his kids? Was it a friend? Maybe it was Michelle! We know she does love to dance. Way to go, Obama.

We see Obama in a whole new light now.

He was cool before, but now it’s on another level. We really love seeing the things that Obama enjoys.

The bilingual singer who’s based in Richmond, Virginia but was born in Cali and is of Mexican and Salvadoran descent got the break of a lifetime by getting a shoutout by the former president.

For those of you who don’t know her, now you know.

Garcia tweeted, “I am tearing up right now. My grandma has kept your picture on her piano for 5 years. Thank you for listening @BarackObama.” We’re tearing up now too!

Like the rest of the world, Obama could not resist Rosalía’s “Con Altura.”

Rosalía was undeniable on the culture hit list for 2019 and there’s no way Obama could avoid her. She was everywhere with her new music this year.

Obama surprised many with his choices this year, but his Latin music artist picks blew us away.

We stan Obama for life!

Now, on the movie front, Obama didn’t choose any Latin films. We know there were slim pickings, but we guess he didn’t watch “Knock Down the House” — the documentary about Rep. Alexandria Ocasio-Cortez’s rise to Congress. Or “The Infiltrators” another powerful documentary about what it’s like to be detained by ICE. Perhaps that last film hits too close to home for the former president.

The Mexican writer tweeted that she was speechless over being on Obama’s list. She tweeted, “Happy, though of course bewildered, that @BarackObama read Lost Children Archive. Curious about what, in those pages, spoke to him, and wondering what thoughts left an echo.” She also added that she wants Rep. Ocasio-Cortez to read her next book! “And now here’s a wish for 2020: that @AOC reads Tell Me How It Ends and pushes for some major reforms!” It’s all about envisioning to bring it to light!

Okay, now that we know Obama gets down as we do, we’re going to play some Ozuna now.

Thanks, Mr. Obama for reminding us why we love you and more importantly why we miss you even more!

READ: More Than 360,000 People Have Signed A Petition Calling For Trump Tower’s Address To Be ‘President Barack H. Obama Avenue’

It was a normal Saturday night for Tequila Kansas City Bar (TKC) bartender, Jose Valdez. He was serving new customers and old when a familiar, unwelcome face walked in at 11 p.m. asking for a drink. Valdez refused to serve the man, recalling the issues he’s caused the bar in the past. The man threw a glass at him and he was promptly escorted out. At 1:30 a.m., the same man walked back into the bar with a friend and handguns. Smoke filled the tiny room as they shot people at random.

Four Latino men were killed and five other victims were wounded. TKC is a private, members-only bar that has always been regarded as a “safe space” for the Latino community. Three of the slain were second-generation TKC patrons. Their parents were also members.

TKC usually staffs a security guard, but he didn’t show up that night.

The owner of Tequila KC Bar told KMBC reporter Matt Evans that the bar scheduled a security guard that night, but “he never showed up.” Kansas City, Kansas Police confirmed that they had arrived on the scene earlier in the night. The suspect had picked a fight with someone as he was being escorted out and the two brawled outside. By the time the police arrived, the fight was over and they left.

Shock and adrenaline allowed the wounded to escape from the bar before the pain set in.

Two hours later, the suspect arrived with an accomplice and handguns. Survivors recall hearing at least a dozen gunshots, and could barely see through the gun smoke.

“They went off so quick I didn’t think it was gunshots,” customer Michael Barajas told the Kansas City Star.

The two gunmen are still at large.

Police have released security camera images of the suspects, in hopes that anyone who recognizes them will come forward. Police have yet to name the suspects, and police spokesman Officer Thomas Tomasic told The Kansas City Star that he doesn’t believe the shooting was racially motivated. “It’s a pretty small bar,” Tomasic told the paper. “You have two guys come in, start shooting, people are just running. People are just running wherever they can.”

Victim Alfredo Calderon had a 6-year-old son and 4-year-old daughter to raise.

While police haven’t released the names of any of the victims, some family members are coming forward to remember their deceased. Juan Ramirez told reporters that his 29-year-old nephew, Alfredo Calderon, died in the shooting. “We’re just in shock and disbelief,” Ramirez told The Kansas City Star, adding that his nephew had “nothing to do with it.”

This wasn’t bartender Valdez’s first shooting either. “I don’t know what to make of it,” he told The Kansas City Star, through tears. “A sad day for everybody who lost their lives and their families. How can you go into a place full of people and just start shooting?” He said he hugged his own niños Sunday morning, saying “pray to God I’m here.”

When a witness’s fiancé was shot, she tried to stop the bleeding and “held him till he took his last breath.”

Shay Celedon was at TKC with her best friend and her fiancé, both of whom have yet to be identified. Celedon said the two were waiting until after her niece’s quinceañera to get down to wedding planning hoping to tie the knot in October 2020. The three were enjoying their night until they witnessed the violent fight outside the bar. Celedon got a sinking feeling and decided to go home for fear that “something bad would happen.”

“None of it really seems real right now,” she told CNN. “We were sitting here yesterday evening having drinks with my best friend’s fiancé. I go home, go to bed, get woken up two hours later that he’s deceased, and she held him till he took his last breath, and tried to bring him back and keep pressure on his gunshot wound. And it was just one fatal shot that took him from us.”

Tequila Kansas City Bar “was a home away from home, you could say.”

Toni Maciel, 36, knew seven of the nine victims personally. While she returned to TKC the following day to be with her “TKC family” and community, she doesn’t feel safe anymore. Maciel knows the wife of the alleged shooter. During a karaoke night just two days prior, she witnessed him physically abuse his wife. Maciel intervened and asked him to leave. “This was a home away from home, you could say,” she told The Kansas City Star. “But after this, I don’t know what would happen with our community.”

As we report on this story, the community is gathering around TKC to pay vigil to the deceased. Kansas Governor Laura Kelly released a statement saying she continues “to be frustrated that these mass shootings and killings occur with regular frequency. Our nation has an obligation to address this ongoing public health crisis.”

READ: Some People Claim This Sandy Hook PSA Has Gone “Too Far” In Illustrating the Impact of School Shootings

TwitterFacebook
Tags:
Kansas CityShootingGun Violence
Most Read
A Latino Veteran Wins $190K Settlement After Being Detained By ICE While Carrying His US Passport BY danielli
A Man Was Caught On A Kiss Cam During A Soccer Game And His Life Fell Apart After BY Jorge Rodriguez-Jimenez
Netflix Cancelled One Day At A Time, But Season 4 Will Premiere On Pop TV In March BY Leah Scott
El Chapo’s Daughter Is Using His Name And Face to Launch A Beer Brand After She Launched A Fashion Line BY Javier Rojas
FOLLOW US
Copyright© 2019 mitú Inc., all rights reserved
WE RECOMMEND
Things That Matter
Immigrant And Father Douglas Rodríguez Is One Of The Victims Of The Tragic Jersey City Shooting
danielli / December 17, 2019 danielli
Entertainment
After A Long Recovery, David Ortiz Is Back In The DR For The First Time And His Fans Went Crazy
César Albarrán Torres / December 11, 2019 César Albarrán Torres
Things That Matter
Authorities Have Identified Gabriel Romero As The Person Who Killed Two People In The Pearl Harbor Shooting
Araceli Cruz / December 4, 2019 Araceli Cruz