The U.S. Might Be In Danger Of Missing Out On The 2018 World Cup After Draw With Honduras

The U.S. Might Be In Danger Of Missing Out On The 2018 World Cup After Draw With Honduras

The World Cup Qualifiers in South America (CONMEBOL) and North America & the Caribbean (CONCACAF) were lit. Let us show you how!

We’re less than a year away from the first kickoff in Russia for the 2018 FIFA World Cup, and a number of teams, besides the hosts, have already qualified for the tournament. Joining the Russians are Iran, Japan, Korea Republic, Saudi Arabia, Belgium, Mexico and Brazil. In Europe, Spain, Portugal, Germany, Italy, and France are practically a victory away from direct qualification. Obviously, that leaves out a number of powerful teams — ahem, Lionel Messi’s Argentina — from the list that were expected to moonwalk into qualification.

The United States is suffering just like Mexico did in 2013.

Veteran coach Bruce Arena was called in as a firefighter to rescue Team USA’s chances of qualifying after his predecessor, Jurgen Klinsmann, lost two games in the first round of qualifying games last year. One of them was a historic loss to Mexico in Columbus, Ohio, usually known as the U.S. national team’s fortress. Unfortunately, Arena’s qualifying run hit a huge snag this past week.

First, Team USA lost to Costa Rica in New Jersey in a historic win for the Ticos thanks to two goals from San Jose Earthquakes attacker Marco Ureña.

In the second round, the US found themselves trailing by a goal for an hour in a match against Honduras, played in San Pedro Sula, until…

… Bobby Wood tied it up with just minutes to spare.

It would’ve have been a huge deal except for the fact that Panama put three past Trinidad & Tobago on the same night, which shot Panama up to third place, placed the US in the fourth place playoff spot and La H trailing in fifth place on goal differential.

The qualification spots create an intense scenario for the final two qualifying rounds in October, when the USA hosts Panama and Honduras faces a second-place Costa Rican team looking to cement its place in the World Cup with a victory. Panama will need at least a draw vs. the USA before facing Costa Rica at home in their final match to keep their hopes alive as the USMNT will be expected to run rampant over a Trinidadian squad with nothing to play for.

Let Peruvian commentator Daniel Peredo show you the emotion behind these important victories!

Speaking of Ecuador… once the leader of CONMEBOL for months, they are now at risk of missing out on Russia 2018 as they languish in eighth place!

What happened to Argentina and Chile?

Argentina are currently sitting in the 5th place playoff spot while Chile is a point behind them in sixth and are in danger of missing out on Russia 2018 after La Roja lost to Paraguay and Bolivia, two teams with no hope at all of reaching the World Cup!

Mexico sealed its entry into the World Cup with a 1 – 0 win over Panama last week. Costa Rica snatched a draw at home versus Mexico in the final minutes, putting Los Ticos one more victory away from direct qualification. 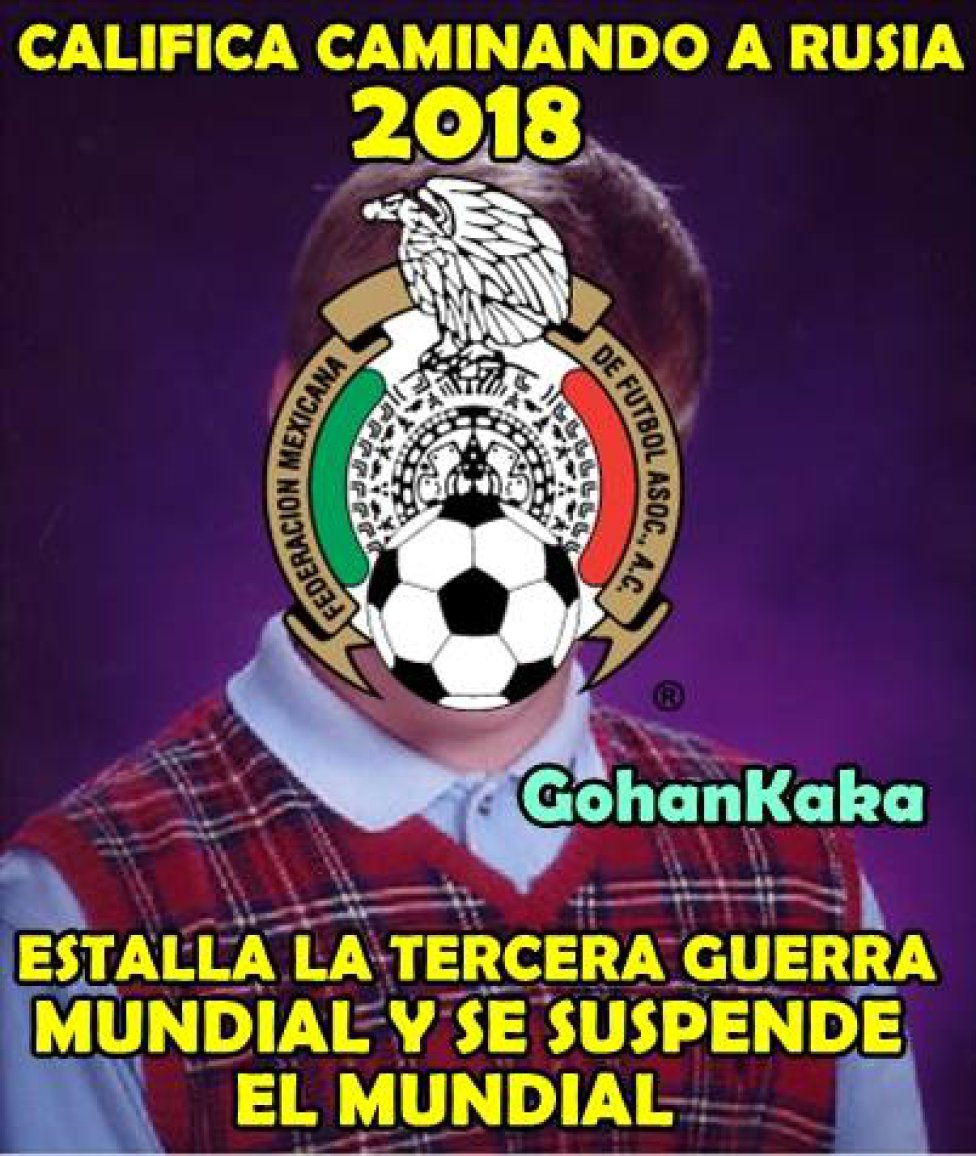 Recommend this story to a friend by clicking on the share button below.

They don’t call it ‘la pasión’ for nothing.

Growing up Latino, you definitely jumped when your dad and tíos got over-excited screaming “GOL” during fútbol matches.  Eventually, we joined in. Now, it turns out that the stress and the nerve-wracking anticipation of what’ll happen next are actually damaging. Like, for real.  A study by the University of Oxford suggested that fans of soccer are putting themselves under some serious stress when they watch their team.

The Oxford study tested saliva from Brazilian fans during their historic loss to Germany at the 2014 World Cup.

The study found levels of the hormone cortisol rocketed during the 7-1 home defeat in the semi-final.

Particularly devoted fans are more at risk of experiencing dangerous levels of the ‘fight or flight’ hormone cortisol.

Cortisol is a hormone commonly associated with stress. ‘Fans who are strongly fused with their team – that is, have a strong sense of being ‘one’ with their team – experience the greatest physiological stress response when watching a match,’ Dr. Martha Newson, a researcher at the Centre for the Study of Social Cohesion, University of Oxford, told BBC. ‘Fans who are more casual supporters also experience stress, but not so extremely.’ This study was published in the journal Stress and Health.

This increase in blood pressure and strain on the heart can be very dangerous.

The researchers found no difference in stress levels between men and women during the game, despite preconceptions men are more “bonded to their football teams”.

Raised cortisol can also give people a feeling of impending doom.

This feeling of doom can be defined as a sense that their life is in danger or they are under attack. Previous research has shown an increase in heart attacks among fans on important match days, whether supporting club or country. Prolonged high levels of cortisol can: constrict blood vessels, raise blood pressure and damage an already weakened heart.

There are many health conditions tied to extreme stress that hardcore football fans should be aware of.

While cortisol is essential to responding to life’s daily stresses, too much cortisol over time can result in a suppressed immune system (more coughs and colds and even allergies), weight gain, and heightened blood pressure with a significant risk of heart disease. Bottom line, all this soccer-induced stress can be pretty dangerous.

In their study, the University of Oxford researchers tracked cortisol levels in 40 fans’ saliva before, during and after three World Cup matches

The most stressful by far was the semi-final. “It was a harrowing match – so many people stormed out sobbing,” Dr Newson told BBC. But the fans had used coping strategies such as humor and hugging to reduce their stress, bringing it down to pre-match levels by the final whistle.

It’s not all bad news though, experts suggest that these findings might be helpful in identifying fans who are at risk.

From our research, we may be better equipped to identify which fans are most at risk of heart attacks,’ says Newson. ‘Clubs may be able to offer heart screenings or other health measures to highly committed fans who are at the greatest risk of experiencing increased stress during the game.’

The findings could also be relevant to improving crowd management strategies.

Passionate soccer fans around the world have been known to engage in violent behaviors, such as hooliganism and other aggressive clashes. The findings could also be relevant to improving crowd management strategies.

The study ‘Devoted fans release more cortisol when watching live soccer matches’ can be read in the journal Stress and Health.

READ: These American Futbolistas Explain Why They Chose Mexico’s Pro League Over MLS

Javier “Chicharito” Hernandez is one of the greatest soccer players right now. Some might even argue that he is one of the most beloved on the pitch. Now, Los Angeles will get a chance to watch Chicharito work his magic for the L.A. Galaxy.

Chicharito is the highest-paid MLS player since David Beckham was recruited into the North American soccer league. The L.A. Galaxy reportedly paid a $9.4 million fee to Sevilla to transfer Chicharito to their time and his guaranteed annual salary will be $6 million.

Fans of soccer and Chicharito are looking forward to what the star player will bring to the new team.

“Chicharito is an outstanding player,” Yon de Luisa, the president of the Mexican Football Federation, told CNN.”He’s the Mexican national team’s leading scorer historically and I am sure he is going to have an outstanding participation here in LA.”He’s going to develop a magnificent rivalry against Carlos Vela, who is his friend, and they will be playing head-to-head in this civil war in LA,” added De Luisa, referring to Hernandez’s Mexican international teammate who plays for rival Los Angeles FC.”I really think it’s going to be a good thing for the city, for MLS and for us as well to have Chicharito closer to the national team.”

The move from the European league to the North American league was not an easy decision for Chicharito.

In an emotional video that is going around social media, Chicharito calls his parents and talks to them about his decision to move to MLS. During the call, the global soccer star breaks down in tears telling his parents about his journey in making the decision.

“It’s the start of the process of retiring, you know,” Chicharito said in the emotional video. When his dad pushes back, Chicharito says, “No, no, Dad, but what I want…I’m saying goodbye – and we’re saying goodbye – to a career in which we worked a lot and I know you guys feel it as well and we’re going to see the positive side and it’s going to be amazing. But if we want it or not, we’re now retiring from the European dream.”

The video is a touching and humble reminder that the superheroes we see on the field are people just like the rest of us.

We’ve all been there before. There is something so grounding and necessary about calling your parents when you need advice or are going through a hard time. We’ve all cried to our parents about different issues throughout our lives. Who doesn’t have a memory of crying to their parents over a hard decision and feeling better after the phone call?

Fans in Los Angeles couldn’t wait to welcome Chicharito to his new city and team.

Chicharito stans learned when he was arriving at Los Angeles International Airport so they showed up and gave him a hero’s welcome. For those of you who have ever traveled in and out of LAX you know how hard it is to get in and out of the airport with the traffic. That just goes to show how much Chicharito is truly loved by those who have followed his career.

Some fans are just happy that Chivas’s loss is their gain.

It is kind of incredible that the Mexican soccer team hasn’t tried harder to bring back one of the best players. Perhaps there isn’t enough money or Chicharito just doesn’t feel like going back just yet.

Welcome to Los Angeles, Chicharito. We are happy to have you!

READ: Chicharito Announced In A Gender Reveal Party That He Is Having A Chicharito Of His Own

TwitterFacebook
Tags:
ChicharitoJavier Hernandezfutbollos angelessoccerSports
Most Read
Puerto Rican Model With Down Syndrome Stuns At New York Fashion Week BY Cristal Mesa
A 25-Year-Old Woman Was Murdered And Skinned, Then Mexican Newspapers Published Photos Of Her Body BY Cristal Mesa
Students Hold Sit-In To Protest Teacher Who Told Their Classmate To ‘Go Back To Your Country’ BY Jorge Rodriguez-Jimenez
A Photo Of This Sad, Sweet Old Lady Went Viral Because She Hadn’t Sold Any Of Her Handmade Napkins, Now They’re All Sold BY Alexis Barron
FOLLOW US
Copyright© 2019 mitú Inc., all rights reserved
WE RECOMMEND
Entertainment
A New Study Shows That Diehard Soccer Fans Are Putting Themselves At A Risk Of A Heart Attacks From Stress
Alexis Barron / January 29, 2020 Alexis Barron
Entertainment
The Steelers Will Have Their International Game This Year, And They Want To Play In Mexico For Their Fans
Alexis Barron / January 24, 2020 Alexis Barron
Entertainment
The Best And Worst National Anthem Performances Of All Time
Anna Prado / January 22, 2020 Anna Prado